About 650 people, women and men of different nationalities of which 400 Eritreans and Ethiopians, live constantly in fear, because we continuously hear shots nearby, we shut here, without protection, without escape routes in case of attack, we risk our lives.
from the internal point of view of this camp, we can say that we live in a pigsty. For months we have received nothing for personal hygiene, we are forced to drink salt water, of which we do not know the origin, health problems is the order of the day, the most serious are the people affected by TB, which are about 40 people, of whom 10 have never had any assistance, 3 are in very serious condition, that nobody is taking care, with the serious risk of transmitting the illness to all of us. Those of MSF had looked out for a moment about a month ago, then we didn't see them again. We urgently need a medical check on everyone, especially that we take care of people already in a clear state of need, that we see them in front of us being consumed, as if they were burning candles from the disease, which is consuming them from within. UNHCR passed four days ago, they simply took the fingerprints of 34 people, ignoring people who had been sick for some time, as well as people who are awaiting resettlement since February 2018, who were previously in the concentration camp of Bin Qisher, they had already been interviewed by UNHCR staff, before their evacuation to where we are today in Zawiya. Now they feel abandoned, many have fallen into depression, others try to escape to take the path of the sea, all this from the desperation in which we are left to survive. We have 7 cases of attempted suicide, among those who have been for a year and more, forced to move from one camp to another, without seeing a glimpse of their future. A few weeks ago, a sick Nigerian woman who did not find treatment died here, even a 3-year-old girl, who lost her life after a fall, died due to a lack of timely help. Here from every point of view we live in constant danger, not to mention deprivation, and the degradation and degrading conditions for our human dignity in which we are forced to survive. 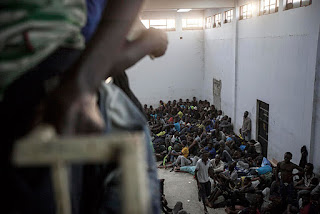 We ask the help of all European institutions and human rights agencies to mobilize themselves to find and implement an extraordinary plan for the evacuation of these brothers and sisters who are today in the conditions described by the testimonies we have gathered. Every hesitation and postponement endangers the lives of hundreds of human lives.