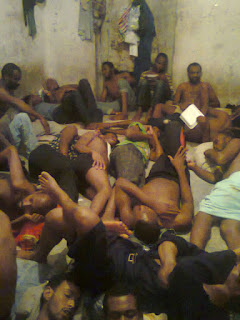 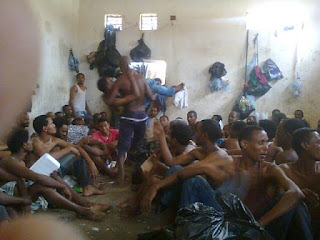 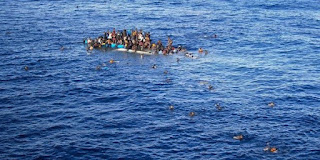 A group of Eritrean refugees in Ethiopia who have formed a club of cyclists, seeking a sponsor to continue racing. They have already been accepted and recognized by the sports federation in Ethiopia, will soon be competing in Kenya at the continental level. We try to support them with fundraising, if anyone interested in this project please contact us. 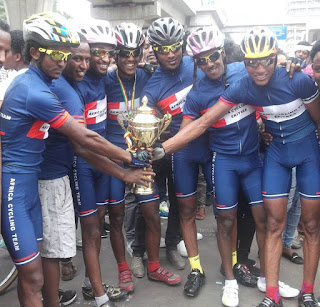 Dear Abba Mussie Zerai
Date 03/01/2016
Greetings first!!!
We are Eritrean Refugees CYCLING TEAM based in Addis Ababa, Ethiopia. Our team riders were composed of talent Eritrean riders. Currently we have 12 riders. We dream big for our team in the future. Indeed we are aiming to become an UCI continental team for 2017. And do races in Africa and other continents. It Mean that we want to become one of the best team in the world and compete against the best riders in the world. But more important we want to develop African cycling, and become the number one African cycling team and help young African cyclists to become Proffessionals. We want to show to evry body in the world that African refugee can have a team constitute of African staff and riders. That Africans are the future of cycling and also of the sport. As part of our programe we made a lot of internal & few international races esspecialy in 2016. At this moment we have 12 riders with having 8 modern road bikes. That means that we are urging to search some governmental or NGO’s that helps us to donate 4 road bikes having a 52 & 54 sizes to challenge the current problem which is facing us.

1. What national and international competitions are you scheduled to participate in and what is the schedule?
Firstly I would like to express my gratitude for being interested in our team. And in the name of all who struggle to survivie we wish you all the best for the coming year 2017. To get back to your question our club came in to existence on February 2015. At that time we could have completed in the Tour Dedebeit held in Ethiopia but we had a 100% shortcoming and few members of the team competed in the mountain bike competitions. Our team finished the year of 2015 without participating in major races in Ethiopia. In the year 2016 we made major progress. At the beginning of the year the team still had problems but we managed to compete in March and the outcome was encouraging. In the following championship races one of our cyclists, Daniel Teklay finished first on two occasions and second in the individual time trial race. In addition to this our team finished second in the team time trial of the Addis Ababa annual cycling championship. After this we have tried to keep contact with several federations from all over the world in order to participate internationally through facebook and email address. And we were invited in many races. Since we were not able to acquire the passport on time we didn’t participated. But this year we will compete in many these races. 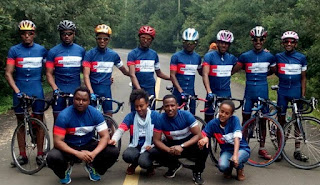 2. What is the training plan for the riders? Do you have a daily, weekly or monthly plan you can tel me about or show me?
We train regularly and produce weekly training plans. For instance after Sunday competition, the team trains an easy 60 km training in Monday. Tuesday’s training is longer and covers a 140 km with slopes in order to activate indurance. On Wednesday the team trains in a 40 km speed training and make sure the trainins is finished in less than an hour. On Thursday the cyclists train in a 120 to 140 km where they pedal normal. On this training they pedal around 25 km/hr. They reset on Friday. To relax their muscles they train for 50 km on Saturday. Then we enter the Sunday competition. Our training is not for tours. When training for tours to increase indurance, ti up to 200 km daily.

3. Where do the riders live? How do they make a living? Do they need to work on jobs other than riding?
We are located in Addis Ababa, Ethiopia. For accommodation as a team we manage from the little remittance we get from family and relatives and live together. Our cyclists are aged between 18 and 24 and have a vision and talent to develop and compete as professionals. In order to stay healthy and strong, they don’t work any other job. After training they have ample time for rest. 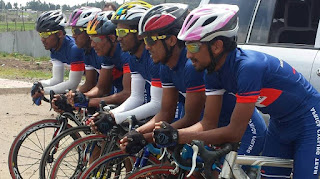 4. Which organization or agency held your team and who finances you? We don’t have governmental or non-governmental sponsors.
As I have mentioned above, the team is supported families and relatives in diaspora of the cyclists. An amount of less than three thousand dollars was donated by Eritreans humanitarian group in America. We expend this money to buy the team’s jersey and one road bike for the talent cyclist Daniel Teklay. It took us for months to finally hold the refugee passport from UNHCR. This is one of the main problems that impeded us from participating in international races in 2016. 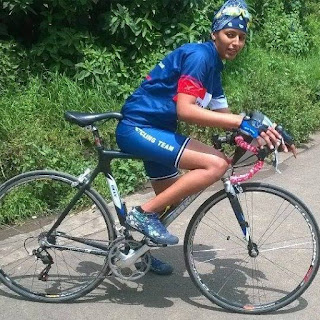 5. Are you in connection with other pro teams and associations over Africa and the world? Is there any cooperation between you?
We have. We have committee for public relations. This committee’s work is to contact both national and international federations of cycling competitions and interact with professional and amateur team to share experience. As a result, we have received 9 invitations which we should have participated. Because we were granted the passport later we were not able to participate. Now that we have our passport we will participate in international competitions from beginning of the coming year. In April we have two international races and that is The Tour of Togo & Tour of Gila (USA). In May and June we will compete in Tour of BEUACHE & Tour of Sagunay (Canada) respectively. We have many other invitations from Africa, Asia & South American nations. And we ask you politely to help us and make contacts with the organizations of the Tour of ARAD Israel. 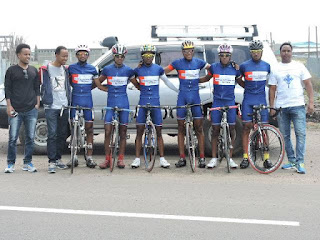 6. What nationalities do you have on your team?
So far our club is comprised of Eritrean refugee and members only. However, many African brothers and cyclists have asked to join in. in due time, after solving our financial problems, we plan to add cyclists in Israel and others in Africa and Europe who compete individually. As yet, Filimon Gebregziabihier has come from Israel and joined the club’s competition. Our door is open to any talented with our any prejudice of origin. 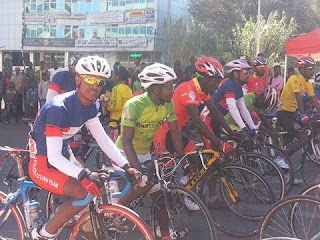 7. Do young refugees riders, kids and adolescents have an opportunity to start riding professionally?
In order to achieve your aim what you need is to start up. Because we had started with a clear vision, our club was able to own gears and jersies and competed in relatively good races. Our future plans are to upgrade into professional team and we have no doubts this will be possible. These refugees with clear vision and practical work can reach professional stage definitely. The gold medalist Eritrean-Dutch in Rio-Brasil Para Olympic is one example of this. 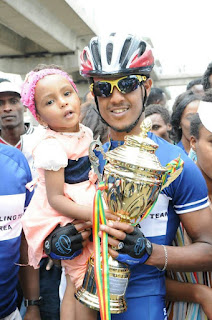 8. What is the situation of the pro riders in Eritrea?
Cycling in Eritrea passes through many impediments. These cyclists who compete in the ground tour are not because of their talents and excellence. Many of the talented cyclists are seattered all of the world, this gave the few remaining to win. Another reason many talented leave to do their national service. And this is hard to swallow for these talented cyclists. However, one way or another, cycling can be described as the 10th ethnicity group and 3rd religion in our country. Even our mothers use them on daily basis. It is given as a gift to a child and ride it to and from school from a young age. It is for this reason that Eritrea from the whole Africa comes first raising a number of amateur and professional cyclist and the stronges teams.

Our trainer! (MEWAEL MEHANSHO) HEAD COACH OF AFRICA REFFUGEE CYCLING TEAM
He was born in 1979 in a place called Demsebay. He learned his elementary, Junior and secondary education in asmara. In 1994 he joined the N.U.E.Y.S. with the mountain bike competition. In 1997, after he finished his high school education, he left for Sawa to enlist in the 7th round military training. From 1998 to the day he stepped down from the saddle of a bicycle he competed with teams like Barako and Zula. Under the umbrella of N.U.E.Y.S, Mewael played a great role in remodeling and developing mountain bike and giving birth to most of the cyclists that are competing internationally. He was an exceptional citizen who worked as a trainer for clubs such as Keih Bahri and Debubawi Keih Bahri Zone and introduced tour Eritrea Mountain Bike in 2007. In the four tours that have been done, he is the only youth that has cycled the whole country. From 2003 he dedicated his life in promoting through mass media and published a book titled “Cycling Competition in Eritrea, 1936-2011” that describes the history of cycling in Eritrea. As a result of all his devotion and hard work to improve cycling in Eritrea, he has been promoted to technical manager of the national cycling federation. Mr. Mewael Mehansho, curently the coach for the Africa reffugee cycling team that has been based in Addis ababa capital of Ethiopia, is certified with the 'level 1 UCI cycling coaching lesson'. and he just left Eritrea 22 months ago. And he founded the team to offer opportunities for the promissing Eritrean riders who are fleeing out of the country for different reasons and became refugees in Ethiopia. Africa Reffugee cycling Team This team is founded by the former Eritrean technical manager of the Eritrean national cycling federation, Mr. Mewael mehansho, curently the coach for the team that has been based in addis ababa capital of Ethiopia. The team comprises a group of individuals which consists both cyclists and members of the technical and official sector of the club. The main purpose of the club is to create a foundation for all African refugees, including Eritrean refugees living in Ethiopia, where the cyclists can demonstrate their skills and share experience. In addition, to change the fate these cyclists which is basically crossing borders illegally, the Sahara and the mediteranean sea like so many refugees, endangering their lives to the point of death. At this moment the club is launched by a group of 12 refugees having 8 road bikes. And made necessary talks to Eritrean cyclist located in different parts of the world. Finhace Micheal from USA, Senay Tsegay from Uganda and we already joined Filmon Gebregiorgis from Israel. The future plans of Africa Refugee Cycling Team has plans to participate in both continental and international competition to find permanent solution to all its preliminary difficulty. And we would like to convey our deepest gratitude to all the countries which invited us to participate in different competitions and we promise to try putting into consideration our budget. Our finance will also decide our future programs in including our African refugee brothers who have requested in joining our club. But we beleive financial shortcoming will not overcome our efforts and deligence. In the near future our club will join some talented cyclists from different refugee camps. 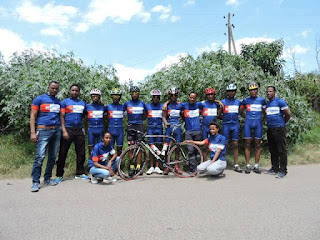 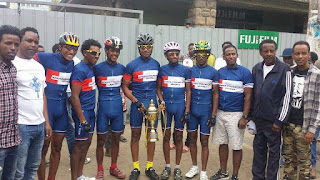 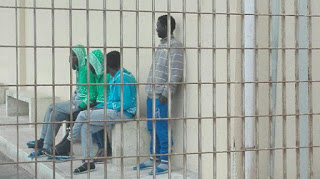