Refugees gather near burnt tents at a camp in Choucha, Tunisia. Photograph: Anis Mili/Reuters
More than 1,000 migrants who fled fighting in Libya have been left without shelter in the Tunisian desert after locals burned down and looted a refugee camp on the country's border, witnesses have claimed.
At least five people were wounded when Tunisian soldiers opened fire on migrants fleeing Tuesday's attack on the UN-managed Choucha camp near the main crossing with Libya at Ras Ajdir, said Alganesc Fessaha, an Eritrean doctor who treated the victims.
The attack, which left around 1,500 residents without shelter, reflected growing resentment among locals against the migrants, mainly foreign workers from Eritrea, Somalia and the Ivory Coast.
Tensions between the two groups came to a head after refugees blockaded the road to the border to protest against being held in the camp, 4 miles from the border.
Locals then attacked the protesters with clubs and iron bars before Tunisian troops fired tear gas and warning shots in attempt to break up the fighting.
But a mob of about 300 Tunisians then attacked the camp, burning down about half the tents, Fessaha told the Guardian.
"Eritreans fleeing from the camp as it burned were beaten by locals lined up and waiting with iron bars," said Fessaha, who was also attacked as she entered the camp.
Fessaha was treating the gunshot wounds of five Sudanese men who said they had been shot by Tunisian soldiers.
"The soldiers shot at us as we fled the camp," said Abu Bakr Osman Mohammed, 39, who spent three years working in Libya and two in jail for illegal immigration before escaping as the conflict started.
"It is a miracle no one was killed," said Father Sandro De Pretis, an Italian priest based in Tripoli who is involved in the aid operation.
"They came in daylight, well organised, and army did nothing to protect the camp dwellers and may have even provided an escort as the locals burned what they could not steal. Something has to be done now for these migrants stranded in the sand."
De Pretis said the attack marked a change in the mood of Tunisians, who have hitherto offered hospitality to refugees streaming over the border , even as they struggle to rebuild their own economy after this year's popular uprising.
After first hosting Pakistanis and Bangladeshis who have now been repatriated, Choucha is now home to 3,300 Africans – including dozens saved from a leaking boat as they tried to make the perilous sea crossing to Italy earlier this month.
"At first the Tunisians brought food to the refugees but yesterday they were out of their minds," said De Pretis.
Father Mosés Zerai, the head of an asylum seekers organisation in Italy, said tensions in the camp had risen after a group of Sudanese men tried to rape an Eritrean woman last week.
"The Eritreans defended the girl and the Sudanese burned down their tents in revenge," he said.
Four Eritreans died on Sunday night as 21 tents burned down, triggering demonstrations over conditions in the camp.
Zerai said the road block was led by West Africans, including Nigerians, who are less likely to be granted asylum status and feared they would be repatriated. "They were already unhappy but after the first fire their anger exploded," he said.
Two people reportedly died in the first clashes with locals on the road on Monday.
"The protest was very stupid, since it halted commercial activity," said De Pretis. "The army did nothing and the locals took the law into their own hands."
Threats by the West Africans then prompted the UN to withdraw all its staff from the camp on Monday with one UN official describing a "general atmosphere of lawlessness in the camp."
"When the Tunisians came, the UN wasn't there," said De Pretis.
On Wednesday, officials were counting the wounded and rounding up families without shelter as apparent calm returned to the camp. Tunisian defense minister Abdul-Karim al-Zubaidi toured the camp as the police and military presence was beefed up.
"On Tuesday night, all the 3,000 or so people in the camp, even those who still had shelter, slept outdoors because they were terrified of being burned alive in their tents," said Fessaha.
Staff from the UN's refugee agency who were touring the camp on Wednesday could not be reached for comment. In Geneva, spokeswoman Sybella Wilkes said "There is a large group of refugees in the camp who have gone through hell and that is now being compounded by their insecure position there."
But according to De Petris, the return of UN staff had done little to reassure the camp's inhabitants.
"There are plenty of women and children here and we are out in the desert," said Fessaha. "You just have to say hello and you get a kilo of sand in your mouth."
http://www.guardian.co.uk/world/2011/may/25/libya-refugees-gaddafi-regime-attacked

Refugees hostage for 11 months forgotten by the international community

I spoke this morning with a group of Eritreans and Ethiopians are hostages in nine people including a boy of 15 years. They told me that in 11 months they lost their 12 comrades who died under torture with electric shocks, the last to die a week ago a24 year old Ethiopian boy named Tesfaldet Aregawi.

They say they are in the midst of an orchard and houses of the trafficker, not far from the border with Israel, to the point ofview the known boundary of the red lights flash to signal danger. Some of them say they were taken by the trafficker whoattacked a police station in the Sinai. Who has sold to a man raiders Eritrean who is in Sudan, which pretends to give hospitality to the poor fellow lost or resources to pursue their journey, and he went to see the boy of 15 years for traffickers, as well as a man 62 year old father came to Sudan to seek one of her children and ended up in this trap known as YohannesEritrean (Wedi Batsi), resides in Sudan has good relations with traffickers Rashiaida ethnicity, with complicity of a few bad apples Sudanese police.
More efforts are needed international authorities, particularly the Egyptian, Sudanese to clear the traffic in human beings from their territories.


Up to 400 people, mainly Eritreans, are being held for ransom by people-traffickers

in Egypt's Sinai desert, a Catholic priest has told the BBC.

NATO has denied a report claiming its military units failed to save dozens of migrants fleeing north Africa by boat which had been adrift in the ocean for 16 days, leading to the deaths of 61 people.
Continua a leggere...»
Pubblicato da Agenzia Habeshia per la Cooperazione allo Sviluppo alle 17:59 Nessun commento:

Eritreans 'being tortured in Egypt's Sinai for ransom'

Up to 400 people, mainly Eritreans, are being held for ransom by people-traffickers in Egypt's Sinai desert, a Catholic priest has told the BBC.
Father Mussie Zerai, who heads a Rome-based refugee charity, says they are tortured and forced to phone relatives for ransoms of up to $10,000 (£6,000).
He said one hostage told him a 24-year-old Eritrean man had recently died after electric shock torture.
Appeals for action to the authorities in Egypt have gone unheeded, he said.
"Many, many, many times I have talked with the Egyptian ambassador here in Italy," he told the BBC.
BBC Africa analyst Martin Plaut says this testimony has been supported by an Israeli group, Physicians for Human Rights, which has documented the evidence of torture on 300 Eritreans who survived a similar ordeal.
Migrants are usually attempting to cross the desert from Egypt to Israel. 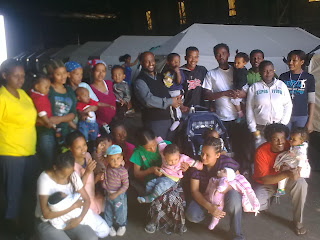 Report the situation of refugees in Malta 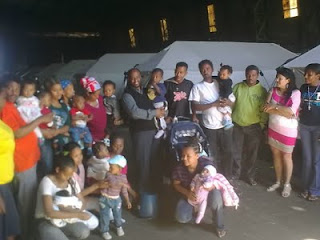 Since May 5, 2011 until May 9, 2011 I visited the Eritrean and Ethiopian refugees have arrived in Malta in the past two months, from Libya.

More vessels are becoming stranded in the Mediterranean, and the death toll is climbing. Some refugees say they were forced onto rickety boats by Libyan soldiers, who rebels say want to use the flood of migrants as a form of retaliation against Italy and France.http://www.latimes.com/news/nationworld/world/la-fg-libya-migrants-20110512,0,2593977.story?page=1

Eritrean priest Moses Zerai, 36, speaks by phone in March with refugees aboard a boat trying to reach the Italian coast in his office at the Vatican. (Vincenzo Pinto, AFP/Getty Images / May 12, 2011)

We demand truthand justice, not the usual buck-passing between different institutions or countries. The testimony of one of the survivors thatyou can listen to this link, which was picked up by the Swiss radio.

Need a survey does not cover up for all but a face full light on this terrible story. Also in the interest of NATO, EU to clarifythis matter, what is happening in the Mediterranean in recent months? Who are these soldiers who are all migrants said they hadseen and met their military vessels. Many say that they have not received aid as in the case of this boat with 72, another boatthat has wandered for ten days at sea with 170 people on board which then landed in Malta, with a corpse of a Nigerian womanpregnant.
Survivors say that this boat has seen many military ships in the Mediterranean without anyone's help.
The humanitarian mission of NATO in what way? Only in throwing bombs at tanks Gaddafi or protect civilians fleeing the war inunderway in Libya, and so these refugees who are fleeing from the same war.

© 2011 Human Rights Watch
Related Materials:
Dying to leave Libya
Libya: Allow Relief Aid In and Refugees Out
What could NATO have done to prevent these people from dying? We need an investigation to determine if, and how, this terrible tragedy could have been averted.
Judith Sunderland, senior Western Europe researcher

(Milan) - NATO and its member countries should conduct a full investigation into allegations of failure to rescue a disabled boat filled with migrants fleeing Libya, Human Rights Watch said today. The boat, carrying seventy-two people including two babies, apparently drifted for two weeks in the Mediterranean before landing back in Libya on April 10, 2011, despite distress calls and sightings by a military helicopter and what appeared to be an aircraft carrier. Only nine people survived, one of them told Human Rights Watch.
Human Rights Watch interviewed both the survivor and a priest based in Rome who was briefly in contact with the passengers by telephone.

Exclusive: Boat trying to reach Lampedusa was left to drift in Mediterranean for 16 days, despite alarm being raised

Refugees from Libya reach Lampedusa. A warship failed to rescue a boat in trouble – leaving 61 people on board to die. Photograph: Francesco Malavolta/EPA
Dozens of African migrants were left to die in the Mediterranean after a number of European military units apparently ignored their cries for help, the Guardian has learned. Two of the nine survivors claim this included a Nato ship.

Moses Zerai founded a refugee coordination agency called Habeshia, which operates from within Vatican walls.
Fr Moses Zerai, founder and coordinator of Eritrean refugee agency Habeshia, spends his time tracing lost relatives of migrants who never arrived to their destinations. He also lobbies with governments to intervene, rescue or protect migrants trapped in situations between life and death.

Stranded in a country torn apart by a raging civil war, hundreds of Sub-Saharan migrants remain abandoned to an uncertain fate by the international community.

An Egyptian soldier was injured near the Israeli border on Sunday during clashes with smugglers, security sources said.
Husam Mustafa, 22, was guarding a 12-kilometer stretch of the border south of Kerem Shalom, when he saw a group trying to breach the border.
Security sources said smugglers were trying to enter Israel with undocumented migrants and drugs.
Clashes broke out between soldiers and the group, and Mustafa sustained gunshot wounds to his head, security officials said.
The soldier was transferred to the Rafah Hospital for treatment. The group of smugglers and migrants escaped into Egyptian territory, sources added.
http://www.turkishweekly.net/news/114813/egyptian-soldier-injured-in-clashes-with-smugglers.html