Exclusive: Boat trying to reach Lampedusa was left to drift in Mediterranean for 16 days, despite alarm being raised 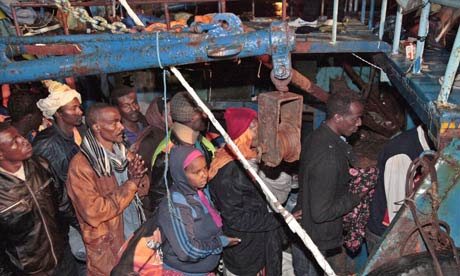 Refugees from Libya reach Lampedusa. A warship failed to rescue a boat in trouble – leaving 61 people on board to die. Photograph: Francesco Malavolta/EPA
Dozens of African migrants were left to die in the Mediterranean after a number of European military units apparently ignored their cries for help, the Guardian has learned. Two of the nine survivors claim this included a Nato ship.

The route of the boat Despite the trauma of their last attempt, the migrants – who are hiding out in the house of an Ethiopian in the Libyan capital – are willing to tackle the Mediterranean again if it means reaching Europe and gaining asylum.
"These are people living an unimaginable existence, fleeing political, religious and ethnic persecution," said Zerai. "We must have justice for them, for those that died alongside them, and for the families who have lost their loved ones."
Additional reporting by John Hooper and Tom Kington in Rome, and Kim Willsher in Paris
• This article was amended on 9 May 2011. The original version referred throughout to a Nato ship. This has been changed to European units pending further clarification. The picture caption also used the wrong figure for the death toll. This has been corrected.