Eritreans 'being tortured in Egypt's Sinai for ransom' 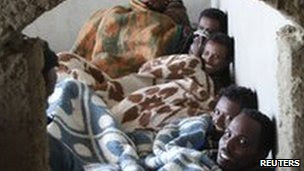 Up to 400 people, mainly Eritreans, are being held for ransom by people-traffickers in Egypt's Sinai desert, a Catholic priest has told the BBC.
Father Mussie Zerai, who heads a Rome-based refugee charity, says they are tortured and forced to phone relatives for ransoms of up to $10,000 (£6,000).
He said one hostage told him a 24-year-old Eritrean man had recently died after electric shock torture.
Appeals for action to the authorities in Egypt have gone unheeded, he said.
"Many, many, many times I have talked with the Egyptian ambassador here in Italy," he told the BBC.
BBC Africa analyst Martin Plaut says this testimony has been supported by an Israeli group, Physicians for Human Rights, which has documented the evidence of torture on 300 Eritreans who survived a similar ordeal.
Migrants are usually attempting to cross the desert from Egypt to Israel.

'Held in containers'
Father Zerai, an Eritrean by birth, runs the Habeshia Agency for Development Cooperation from the Vatican - a charity for asylum seekers, refugees and migrants.
The hostages sometimes contact him by phone, relating the conditions in which they are kept.
They are held by Bedouin gangs, often in appalling circumstances - detained in shipping containers or in pits.
Father Zerai says they are tortured with electric prods and others are raped to force them to get ransoms transferred to the accounts of the traffickers.
He said he had spoken to three sets of hostages on Thursday, who explained they are usually held in groups of up to 35.

Sometimes they are passed from one gang of smugglers to another, he said.
From the phone calls on Thursday, he learnt about the death of the 24-year-old Eritrean and also of a 27-year-old Ethiopian man who had died on Wednesday.
"They are threatening the lives of two other young boys, the youngest of the hostages [is] a boy of 13 years," he said.
"In recent months dozens of hostages have died in the Sinai at the hands of robbers, we ask the European Parliament to put pressure on governments in the region to secure the release of these hostages and put an end to trafficking in human beings."
Hundreds of people are estimated to flee Eritrea every month, often making risky journeys to reach Europe or Israel in search of better opportunities.
Critics say they are fleeing the country's repressive government, poverty and national service for men until the age of 40.
http://www.bbc.co.uk/news/world-middle-east-13388039