War in Tigray: an investigation immediately of the UN Commission on human rights violations and war crimes 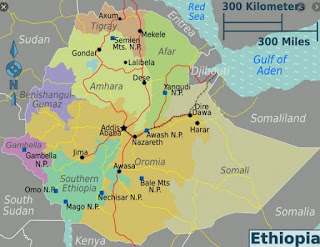 "Erasing" Tigray as a political entity and even as a community: this seems to be emerging on the conflict that has been going on since the beginning of November 2020 in northern Ethiopia. The news that filters is scarce: all communications are interrupted from the very first days and the Addis Ababa government has imposed a strict embargo, preventing access not only to independent media but even to humanitarian organizations that have mobilized to bring aid to the civilian population. The little that has emerged, however, is already such as to paint a terrible picture, made up of death, destruction, violence that goes far beyond even the horror that every war entails.

Addis Ababa denies that a war is underway: it claims that it would be "only" an internal operation of public order, to restore legality in a region that has fallen into the hands of rebels who would have put themselves out of the constitution. In reality it is a double war: a fratricidal civil war and a regional war in which, as an ally of the Ethiopian government and federal army, Eritrea, a foreign state, led by a ferocious dictatorship, plays a major role. for years he has seen his "first enemy" in the Tigray People's Liberation Front, the political formation that has long been in effect leading the whole of Ethiopia and still leader in the regional state of which he considers himself the only legitimate authority. Perhaps the horrors that are emerging depend precisely on this combination of factors.

The news that has arrived so far is due to the testimonies of refugees, to the reports of international institutions such as UNHCR and the Red Cross or to courageous NGO operators who have managed to maintain some contacts, to the reports / appeal of some religious, such as in particular the bishop of Adigrat. They all agree that a war of total destruction is being fought, with episodes that can constitute real crimes against humanity.

The data itself is eloquent

- A huge number of victims. It is not known exactly how many, but certainly in the order of thousands and thousands, mostly among the defenseless civilian population

- Over 2.2 million internally displaced persons: in practice, more than a third of the population of the entire Tigray

- About 3 million people (including internally displaced people) who no longer have to live and are reduced to hunger, so much so that all observers agree in speaking of "widespread malnutrition" while several starvation deaths are already occurring. In particular, the letter / report that the bishop of Adigrat managed to send to various institutions abroad to ask for help is eloquent

- Indiscriminate reprisals with unjustified killing especially of young people, perhaps for the sole suspicion that they are sympathizers of the TPLF

- An increasing number of reports of sexual violence, both individual and group, which indicate that women are the first victims of this situation and which, if confirmed in the suspected size, lead to suspicion that rape is used as a "weapon of war" .

- The bombing, attack and looting of places that symbolize the faith and culture of the Tigris as if to also eliminate the roots and the spirit of the Tigrinya people to complete the "ethnic cleansing" that seem to connote the massacres and displacement forced of entire communities. Suffice it to recall, for example, the complex of the cathedral of Santa Maria di Sion in Axum, the holiest place of the Coptic Christian religion, where, according to tradition, the holy ark of the tablets of the law received from Moses is kept; the Al Najashi mosque, near Wukro, the first built in Africa, a symbol of the coexistence between Islam and Christianity; the monastery of Debra Damo, perhaps the most prestigious center of religious studies in Ethiopia, where it appears that the library, keeper of the oldest and most precious sacred books, most of which would have been destroyed, looted or partly stolen, was particularly affected by the soldiers, perhaps with the intention of selling them on the clandestine market

- The almost total destruction of hospitals and centers doctors: it is estimated that less than 15 per cent remained in operation and, moreover, without supplies of medicines and food, without reserves of fuel to operate the generators that are certainly essential due to the frequent, very long interruptions of the electricity supply

- The systematic destruction of infrastructures and production equipment (such as the factories of Adigrat, for example) especially by the Eritrean troops who would complete the looting by plundering the plants or any useful material to transfer it across the border with military truck columns. According to numerous complaints from refugees, the looting would not steal even the private property of families, starting with cars and even food supplies. A total destruction, in fact, which - by overlapping, among other things, an already difficult pre-war economic situation and desertifying the countryside - risks immediately causing a long, terrible famine and, in general, paralyzing and "retreating" for years the economy and the possibilities of recovery of the entire Tigray

- The de facto delivery to the Eritrean troops of thousands of refugees who, fleeing the dictatorship of Asmara, had found refuge in Tigrai in the Shimelba and Hitsats camps. Some were killed in the fighting that directly invested the two structures, many fell into the hands of the regime from which they had escaped and which they accused with their own escape: thousands of these (no less than 15 thousand) are practically disappeared and it appears from various testimonies that a good percentage of them, carefully "selected" people, were forced to return to Eritrea. Ethiopia, to which the refugees had entrusted their lives seeking asylum, did not object in the slightest, in evident contrast with international law.

Even if only part of this will be confirmed, it is evident that the ongoing war is characterized by the constant, daily violation of the most elementary human rights. Hence, then, the need for the UN, precisely through the Commission for Human Rights, to promote and indeed demand an in-depth independent international investigation. The governments of Addis Ababa and Asmara deny that an emergency situation such as the one described has been created. Prime Minister Abiy Ahamed, declaring the "operation of public order" concluded at the end of November, with the conquest of Macalle, went so far as to argue that there were almost no casualties among the civilian population. In this vein, he has always rejected the hypothesis of an independent investigation. The situation that is emerging is such that it cannot be tolerated yet that we do not go and verify “on the ground” what has happened and what is still happening.

Faced with the suspicion of a blatant violation of human rights and episodes that take the form of crimes against humanity, the international community has not only the right but the duty to intervene. And, precisely because these are crimes against humanity, it has all the juridical and legal instruments to do so. Regardless of the will of Addis Ababa.