Sinai, the horror of the slave market 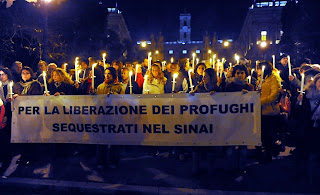 Seven years have already passed since the first complaints. But since then, it was 2006, the human trafficking in the Sinai did not know stops. Indeed, it has become increasingly prosperous. In the last three years in particular, there has been a genuine escalation, which added to the traffickers and their accomplices. Shedding the blood of hundreds, thousands of innocent people. These robbers did not spare even children and pregnant women, often forced to endure unspeakable violence and sexual abuse. But the leaders of the world have preferred to turn their backs in front of the poor, these "last of the last" taken hostage and enslaved.
E 'in November of 2010 that I began to deal with this real humanitarian emergency. I denounced the horror to the world through all the mass media, knocking on doors of embassies, governments, parliaments. Up to the Pope I was not alone in this battle. With me and the agency Habeshia have also undertaken other humanitarian organizations. All together we showed the international community that horrible tragedy that is unfolding in the Sinai desert, on the edge of the border between Egypt and Israel. But the powerful were deaf, obstinately deaf to the cries of pain of thousands of human beings. Thousands of new slaves ignored by all governments of the global North.
It 'a guilty indifference and absurd. For believers as non-believers. Just stop for a moment to reflect. "God is no respecter of persons (Acts 10:34; cf. Rom 2:11; Gal 2:6 Eph 6:9), since all men have the same dignity as creatures in His image and likeness." And the Incarnation of the Son of God manifest equality and the equal dignity of all men and women. "There is neither Jew nor greek, there is neither slave nor free, there is neither male nor female, for you are all one in Christ Jesus" (Galatians 3:28, cf. Rom 10.12; Cor 12:13, Col 3:11). It 'been a long and arduous battle of humanity to affirm these principles. In particular, in the twentieth century, the struggle for human and civil rights, anti-slavery, inequality, exploitation of man by man, the abuses. In contrast, in a word, the denial or suppression of human dignity. Decisive is the Universal Declaration of Human Rights proclaimed by the United Nations on December 10, 1948: the starting point for a more just world and a better future, not surprisingly came in the aftermath of the immense bloodshed and the horrors of World War II.
Today, however, it all seems forgotten. Is positive, however, be permitted only everything that makes money. Even the traffic in human beings and organs for transplantation illegal. They do not talk of nothing but money and the economy, as if the value of human life runs out in the markets and in the bag. And the powers that have the responsibility to govern the planet seem to have forgotten that their primary role is to ensure the quality of life and the respect for human dignity. That at the center of the economy, there must be still a man. There is no future without the defense and affirmation of the common good.
It 'eloquent in this regard, even the Social Doctrine of the Church: "The responsibility to achieve the common good lies, as well as to individuals, even to the state, because the common good is the raison d'etre of political authority. The State, in fact, must ensure cohesion, unity and civil society organization which is expressed, so that the common good can be achieved with the contribution of all citizens. The individual man, the family, the intermediate bodies alone are not able to come from themselves to their full development, hence the need for political institutions, whose aim is to make available to people the goods necessary materials , cultural, moral, spiritual lead a truly human life. "
And here's the point, then. The governments of the countries in which we asked for help, to do everything possible to plead for the release of the hostages seized by the merchants of human beings, they have forgotten the common good. They do not want to understand that even the salvation of those poor people is the common good. It can not be the lives of over 65,000 people ended up in the hands of traffickers. But all is quiet, despite the constant, fearful signs that confirm every day this huge emergency. Like the more than three thousand young men and women, of whom all trace has been lost in Sinai vanished. Or the discovery, in the desert, so many graves where are the remains of hundreds of desperate people.
They are pursuing the common good, in particular, the governments of Egypt, Israel, Sudan, Eritrea. No one really mobilized to capture the merchants of death and put an end to this horrible crime. One wonders how many innocent people have to die before these countries and, more generally, the "powerful of the earth" feel the duty to defend and protect the lives and rights of these people. "Guilty" only to be displaced and refugees. 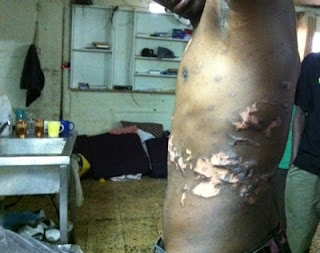 Hear every day crying and despair of the hostages and their families, it is a pain is the signal that injustice prevails, that human dignity is trampled upon, that human life is worth 30 to 60 thousand dollars, the ransom demanded by criminal organizations to liberate the captive prisoners. No one can remain silent in the face of all this. I'm going to appeal, then, to those who govern the fate of the planet: "Give us back our dignity. Give us back our freedom. Give us back the rights that our fathers, in 1948, writing the Universal Declaration, aimed at bringing all of us and for all of us. The international community gatherings moral strength of those men who have placed at the center of the goal and duty of the United Nations human beings and their fundamental rights. Today need that same energy to fight the horror that is bloodying the Sinai: a crime against humanity committed under the eyes of the international community. "
There are thousands, at this time, people at the mercy of traffickers. The boys are held captive in the desert and their families, overwhelmed by the need to put together in any way the ransom money. Men and women ended up in the maelstrom of a horrible tragedy while trying to escape war and persecution. They left their country looking to the North as "homeland" of freedom and human rights. The international community can not continue to look the other way.