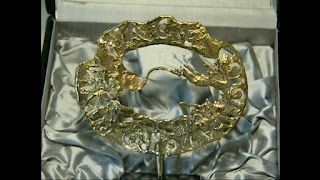 Back on June 23 Award Disarmament Archive - Colombe d'oro for Peace awarded annually to journalists and international personalities who have most distinguished themselves in promoting the themes of peace, non-violent conflict management and international cooperation. In the course of thirty-one editions the prize was awarded to 61 journalists and 31 international personalities. Among others: Olof Palme, Nelson Mandela, Perez de Cuellar; John Hume, Jesse Jackson, Gino Strada, Hans Blix, Daniel Barenboim.
This year the jury, made up of Fabrizio Battistelli, Dora Iacobelli, Riccardo Iacona, Dacia Maraini, Andrea Riccardi and Tana de Zulueta, will deliver the gold Colombe Thursday, June 23 p.v. For journalists section withdraw the prize:
Diego Bianchi "Zoro", blogger and host of the television program Gazebo, author of the original evidence on metropolitan suburbs of Rome and the Mediterranean. At the news of the Prize, the popular presenter commented: "The conflict has now entered into the house. In reporting recent years, Foreign were a bit 'mistreated, but when they get into the house, not only in Lampedusa but throughout Italy, you have one more reason to speak of Foreign Affairs. As? Going directly to us in places permeated by what we see. Everything is in tell, later, in the most direct way. "
Lorenzo Trombetta, Ansa correspondent for the Middle East, for years with competence and courage explores the complex Syrian issue. He said: "I dedicate this award to Father Paolo Dall'Oglio, an Italian citizen for three years vanished in northern Syria, which is fighting for peace and dialogue between communities."
Lucia Capuzzi of Avvenire, gives an account of the paradoxes produced by poverty, authoritarianism and economic dependence as wounds that mark the Latin American continent. Capuzzi observes: "250,000 people killed, massacred 30 young people every day in El Salvador, 400,000 people a year who attempt the journey-nightmare from Central America to the United States. It is not only structural violence. It is war. "

There are two international Colombe d'oro 2016

Don Moses Zerai President of Habeshia, agency that works for the integration of immigrants, giving them assistance in emergencies, in legal protection, in educational action. He says Don Zerai "There can be no peace without the recognition of fundamental rights by the people. This is my commitment, to protect the fundamental rights of people in movement, giving voice to those who live in conditions of segregation and persecution ".
Humanitarian corridors promoted by the Community of Sant'Egidio, Federation of Evangelical Churches in Italy, the Waldensian Church. A project that in two years will provide a safe and legal asylum to thousands of refugees from Syria and Africa.
Disarmament Archive organizes the Award with the support of the member Cooperatives in LEGACOOP.
Pubblicato da Agenzia Habeshia per la Cooperazione allo Sviluppo a 14:57