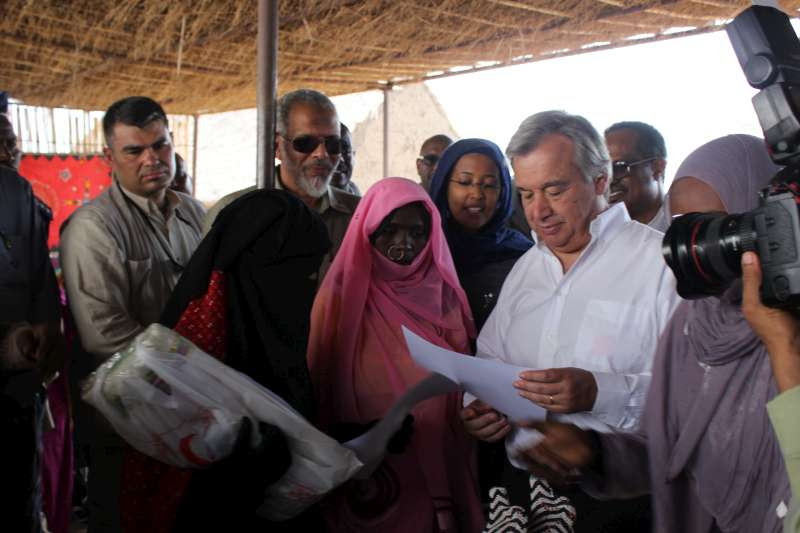 © UNHCR/A.Awad
High Commissioner António Guterres with Eritrean and Ethiopian refugees in Shagarab I camp, eastern Sudan.
KHARTOUM, Sudan, January 13 (UNHCR) – UN refugee agency chief António Guterres ended a visit to Sudan this week by hailing efforts towards lasting solutions for thousands of long-staying refugees in eastern Sudan, while raising concerns about the trafficking of vulnerable people in the region, including asylum-seekers.
"Our refugee programme in Sudan is one of the oldest in Africa, at 45 years. Since then, the government has been hosting refugees from many countries generously," Guterres told journalists in Khartoum on Thursday. Acknowledging the strain that generations of hospitality has put on the Sudanese people, he announced plans to launch an initiative "aimed at helping long-staying refugees become more self-reliant through livelihood projects while also supporting the local community through development projects."
The transitional solutions initiative is supported by the government and will be jointly implemented by UNHCR, the UN Development Programme (UNDP) and the World Bank, starting with a few pilot camps in the east.
Earlier on Thursday, the High Commissioner travelled to Kassala in eastern Sudan to meet the country's largest concentration of refugees, numbering more than 86,000. Many had fled fighting over the past half century between Eritrea and Ethiopia, but the majority were born in Sudan's camps, where they share the ethnicity, language and religion of their host community.
At Shagarab I camp, Guterres met refugee women who had benefited from a micro-credit scheme funded by UNHCR. Among them was Asha Adam, 28, who has been trained to make handicrafts and to run a small business. With an initial loan of 150 Sudanese pounds (about US$56), she started a small "cupboard" shop in her parents' home, selling biscuits, tomato paste and soap bought from the local market.
"It's going well," said the Eritrean refugee, who was born and bred in the camp. "I hope to expand my business into a proper shop that sells more daily necessities like sugar and coffee. My parents are old and my two brothers have daily-wage jobs in the market, so this will help to increase the family's income."
While at Shagarab, the High Commissioner also met some of the recent arrivals. Every month, some 2,000 asylum-seekers reach the camp, mostly single young men from Eritrea. Some come to escape military service back home, others just want a better life elsewhere. Most of them leave the camp within two months of arrival, using smuggling networks to circumvent restrictions on movement and continue their journey to Khartoum, the Middle East or Europe.
Younas, 25, fled Eritrea after enduring years of low pay and harsh conditions in the military. In his four months in Shagarab I camp, he has tried twice to go to Khartoum, which he feels is safer for a deserter. Twice he was arrested and sent back to the camp. But he is determined: "As long as I'm alive, I'll keep trying to find a safer place to go."
Speaking to a group of recent arrivals, Guterres said, "It's painful to see so many young people become victims of trafficking and kidnapping. Some are even killed. We are prepared to support the government to crack down on the smugglers and to protect the victims."
He added, "This is not only a Sudanese problem, it is a global problem that calls for many countries in the region to respond."
During his Sudan visit, the High Commissioner addressed another pressing issue – the future of an estimated 700,000 southerners living in Sudan after South Sudan seceded in July last year. Some 110,000 of them have so far been registered to return to South Sudan, but are stranded in Khartoum and other areas due to a lack of funds, transportation and security.
He listened to their problems when he visited a departure point at Mayo Mandella in south-eastern Khartoum on Wednesday. Some 245 families originally from the south have been living in makeshift shelters here, some of them for more than one year.
"If you want to serve us, please help us to speed up the transportation," said one woman at Mayo Mandella. There are not enough trains and barges to go south, and some roads are unsafe for travel, especially through conflict-affected areas like South Kordofan.
Guterres, who had visited South Sudan earlier this week, noted, "Both governments have agreed to a bilateral plan of action, which we hope will be established in the near future to allow for a more effective return to the south. This will involve air movements for the most vulnerable people, but the opening up of safe convoys by land will be most crucial."
By Vivian Tan, in Khartoum, Sudan
http://www.unhcr.org/4f1005e99.html
Pubblicato da Agenzia Habeshia per la Cooperazione allo Sviluppo a 17:01