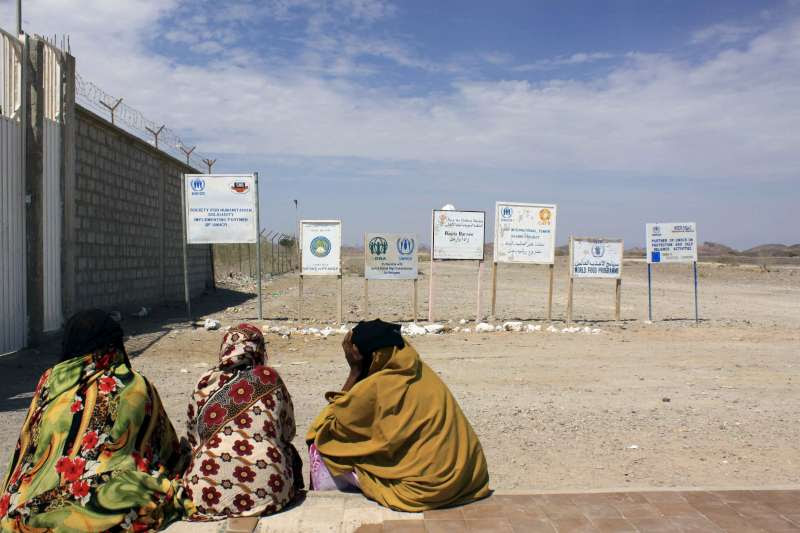 © UNHCR/R.Nuri
Refugees outside Kharaz camp in Yemen, a country from where 55 Eritrean deserters were recently resettled to Sweden.
SANA'A, Yemen, June 1 (UNHCR) – Military service is mandatory in many countries around the world, but in Eritrea it is often indefinite in duration and conducted under harsh conditions, prompting thousands of young men and women to desert and flee the country every year. Often, it might seem like jumping from the frying pan into the fire, with many ending up in prison in neighbouring countries.
These are people of concern to UNHCR because of the consequences they would face if returned to Eritrea. Recently the refugee agency was able to help arrange the resettlement to Sweden of 55 Eritrean refugees who had been imprisoned in Yemen for almost two years. All had crossed the Gulf of Aden to flee the military and none of them can return to their homeland.
The group flew to Stockholm last month, from where they would continue their journey to various cities across Sweden. Sweden receives around 1,900 refugees for resettlement every year and they are usually placed directly in a municipality, which could mean living in a rural or urban setting. A wide range of integration activities is arranged for them, including language classes.
The entire group seemed to be delighted to be in Europe – far away from Eritrea and the memory of their ordeal in the military, and from their prolonged detention in poor conditions in Yemen.
"In Eritrea, military service is mandatory and young men are forcibly recruited through round-ups which involve house, school and workplace searches," explained Ahmed, age 22. "In 2006, I was taken from school and forced to serve in the military for around US$15 a month. After three years, I decided to flee and head to Yemen," he told UNHCR shortly before leaving for his new life in the colder climes of Scandinavia.
Military service is mandatory under Eritrean law; it's the difficult conditions and indefinite duration of service that strike fear into so many recruits. And those who are caught trying to desert or evade national service could face severely disproportionate and extra-judicial punishment.
Another of the Eritrean men, Mahmood, said he knew that military recruitment would lead to persecution. "There is no freedom of choice. We are forced to serve for life, earning very little money; you can barely support yourself, let alone an entire family," he said in an apartment in Sana'a leased by UNHCR to house the refugees before their departure.
Each of the 55 men accepted for resettlement in Sweden had a different tale to tell, but they shared a common willingness to make the dangerous boat journey across the Gulf of Aden from the Horn of Africa. Hundreds of people die every year trying to make this crossing.
All were rounded up and interrogated for several days by the authorities after they arrived on the desolate beaches of Yemen. They were then detained in the Red Sea port of Hodeidah, Yemen's fourth largest city. "They sent us to the central prison without any explanation, so we were confused and soon began to lose hope," said Mahmood, who had planned to contact UNHCR and seek help in applying for asylum.
The Yemeni authorities allow UNHCR to visit detention centres around the country to screen potential asylum-seekers and ensure that they receive protection assistance.
UNHCR staff found that these Eritreans could not return home and there was clearly no future for them in Yemen. Resettlement was the only viable and sustainable answer for them and their names were referred to Sweden.
"The day the UNHCR [protection] staff came to interview us in prison I became optimistic again about my future – and here we are," said a delighted Faisal. "I am happy because I will have a chance to study and work," added the 21-year-old, who wants to first learn the Swedish language and then study to become a doctor.
None of those questioned by UNHCR regretted their decision to flee overseas, despite detention in Yemen. "I would have done the same thing even if I thought I would be imprisoned for five years. The real horror is what is waiting for me back home, not here," said Mahmood.
By Cagri Hurmuzlu in Sana'a, Yemen
Pubblicato da Agenzia Habeshia per la Cooperazione allo Sviluppo a 17:49