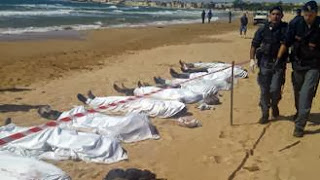 Agency Habeshia : - We are crushed by grief at the death of our migrant brothers and sisters died , hoping to reach the promised land . In one week, two tragedies that leave us speechless , we express our sympathy and condolences to their families.
But we want to say to the leaders of nations the responsibility for these tragedies were avoidable if you listen to the calls we do for years, if you would have heard the call of the Holy Father Francis. To humanize the laws that govern the relationship north and south of the Mediterranean , we need a common commitment to making the Horn of Africa livable, all these deaths come from that area because they are desperate because of the political situation of the despotic regime in Eritrea , Hunger in Ethiopia and the War in Somalia.
The bilateral agreements with Libya we see the result we have only favored the traffickers and corrupt Libyan military or militias that are getting rich on the skin of the desperate . The detention centers in Libya are filled with other desperate , just pay will soon be released, we will have more boats coming up with possible tragic events we are crying now . 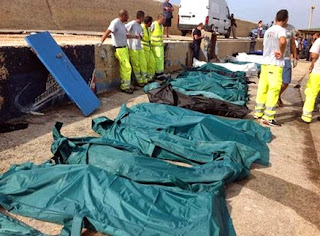 The solution would be for Europe to put in place a project for the reception of asylum seekers and refugees , opening a humanitarian corridor protected for those in need of international protection , only with instruments for legal entry , you can subtract thousands of desperate people from the hands of traffickers . Not closing the door in the face to those who come to ask for protection , up to now Europe thinks only protect your fortress , but when so much despair around if we do not take that fortress . It was necessary and we must work to prevent the causes of so much despair , dictatorships , wars, famine that drive thousands to flee , we must act on those nations that use immigration as an outlet to avoid "spring and revolutions " in their own home . pieces was involved in facilitating the immigration of their citizens. We must demand from transit countries such as Libya respect for human rights , respect for workers , many sub-Saharan Africans would remain to work in Libya if they were not discriminated against because of skin color, for the Christian faith , for the condition of slavery in the place working .
Every year we see these tragedies to world leaders express their displeasure but everyone ends up in oblivion, moms, wives , husbands, children who have lost their family continue to mourn continue to ask why this happened where's the solidarity , the protection of refugees and displaced persons , victims of human trafficking .
We call for Europe to act quickly too has already lost a lot of precious time that would save many of these lives.
Pubblicato da Agenzia Habeshia per la Cooperazione allo Sviluppo a 16:33