The silence is even more deafening!


Two years after the tragedy of the 63 refugees, left to die for failure to rescue them, the silence is even more deafening! 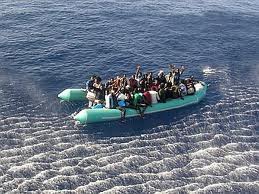 The accuation of Father Mussie Zerai, Habeshia Agency: " 63 died, 61 at sea and 2 in Libyan prisons. Sea currents brought them back on the shores of Libya, where they were also arrested." Of the 9 survivors, 8 were Ethiopians (of which a woman) and one Eritrean
ROME - "I'm amazed - says Father Mussie Zerai, president of Habeshia, Cooperation for Development - because 90% of the states have opted for silence in front of an act so grievous, cruel and inhumane; we have been denouncing it for two years. That is the fate of the boat departed from Tripoli the 25th of March 2011, with 72 people on board, and whose traces were lost in the late afternoon, March 26 of two years ago. It was located for the last time about 60 miles from Tripoli and then the nothing – adds Father Zerai. We had repeatedly reported their disappearance, and we were told that they had not been found. "
Two survivors died in prison. The testimony of the president of Habeshia continues: "Fifteen days later we were contacted by 9 people who, after two weeks at sea, had returned to Tripoli. Survivors told us of being in 11, two women and 9 men. Sea currents led them to Zelatien (not far from the border with Tunisia) where the military of Gaddafi took them and put in them prison. Two of them, a boy and a girl, died in jail because they were not rescued and cared for. After some days 7 of the survivors were transferred to Tuweshia prison, in Tripoli, while two were taken to hospital in Zelatien. "
"Abandoned by ships and military vessels." The story of Father Zerai continues with an accusation: "The refugees have been abandoned by several military ships, but also fishing boats, one of which was Italian, and a helicopter that  approached throwing them something to drink, but then left them to die. An inhumane act ",  adds the priest. "These nine people are witnesses to the tragedy. I talked to them, they have lost wife, brother, sister and girlfriend, who died of hunger and thirst." Then a particularly dramatic story about "their inflatable boat that stopped for lack of fuel. They asked me for help, and to the competent authorities, they tried to talk to the Italian Coast Guard, but they did not understand each other."
The questions remain those of two years ago. "We demand that NATO makes full light into this matter-  concludes Father Zerai . Why these 63 people were left to die? Whose was the helicopter that just  provided water to the refugees and then did not send aid? Which are the warships that have sighted the boat in the days between March 25 to 30?  These people died because someone decided not to help them. We want to know whose choice was this. We ask those who know, those who have seen must speak, enough of this State conspiracy of silence.
Pubblicato da Agenzia Habeshia per la Cooperazione allo Sviluppo a 12:13