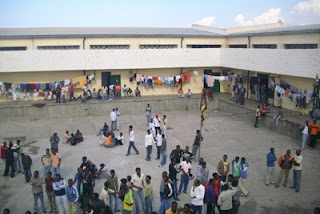 Pubblichiamo questo appello, in inglese, scritto da un gruppo di sei studenti universitari eritrei detenuti nel carcere di Misratah, in Libia, come migranti irregolari. Hanno lasciato l'Eritrea perchè perseguitati politicamente dopo le manifestazioni universitarie del 2001. Sono stati arrestati dalla polizia libica mentre tentavano di raggiungere l'Italia per chiedere asilo politico. L'appello è stato scritto nel mese di agosto 2008. Oggi, alcuni degli studenti firmatari di questo appello sono riusciti a arrivare in Italia. Altri vivono clandestinamente a Tripoli, in attesa di partire per Lampedusa. Altri invece sono ancora dentro il campo di detenzione. To whom it concerns Dear Sirs, first of all we would like to extend our warmest and deepest greetings. Indeed we would like to say thank you for your endless effort that you have done to rescue us from being deported and falling into problems. We are writing this letter regarding our unique problem. We are a group of university and colleague students who escaped out from our country, for safety and security reasons, due to the dictatorial regime existing in our country. PFDJ is the only single political party which is owned and backed by government. The party has plotted a lot of conspiracies to undermine and dismantle the foundation of higher level education institutions, to mention some of them: - introducing new curricular meters - dispatching high school completed students to Sawa - implementing a compulsory summer work campaign - forbidding individuals to work in private sectors - inception salary payment A typical example of all mentioned above is the August 2001 clash between the government and the university students. The clash was broken out after the proclamation of compulsory summer work campaign and the argument of the Students Union of Asmara University. On this circumstance the government initially fabricated lies upon us and broadcasted it through the media, so that we would be assumed as betrayers to the nation. Besides on its propaganda the government distributed to the society as if we had advice with and were fully supported by the foreign powers and to be assumed the country’s security is in danger. Consequently we are condemned to be jailed in Wea area, where temperature often reaches 45 degrees, which took the lives of two innocent students. In continuation of its weakening policy against higher education the government was determined to and closed down the University of Asmara, the only University in the history of the country. Without any opposition from the society the government in replacement opened Eritrean Technology Institute, a colleague which is totally under military administration and aimed to turn individuals into military scholars. At the moment anybody who is a member of higher education society faces: 1. Control over his daily movements from the society even his closest friends; 2. Opposition against him, no matter weather his suggestion was productive; 3. Interrelating his opinions with politics, so that he wouldn’t get involved in any social activities again; 4. Compulsory forced employment under PFDJ-Organisation and putting more pressure on him to take responsibilities; 5 While imprisoned in different occasions he would be blamed for the 2001 clash as main designer; 6. Banning individuals from holding education documents By changing the attitude of the society towards the worthless of higher educational society and extracting more pressure on us the government came out victorious on its policy against higher educational society. They seal the hatred and atrocity that had been practiced when we are in our country or are implemented here in this detention camp of Misratah. And any minute, if we are deported this community will be on the government in charging us. This will make us suffer more than anybody else of even loose our lives. This all is only because they think we are educated. But jet we do not feel so, even our education appetite is not fulfilled. Looking all the facts behind us, we are afraid and under heavy mental pressure. So we apply collectively, believing we would get a solution to all our problems including this two years imprisonment. We kindly request our secrets and opinions be kept as much as possible. Thank you. 6 Students, Misratah August 2008 testo raccolto da Roman Herzog
Pubblicato da Agenzia Habeshia per la Cooperazione allo Sviluppo a 19:17